ORCHIDS OF THE WESTERN CAPE

The Cape Floristic Region is found in the Western Cape of South Africa and is famed for its high plant species richness (8 700 species) and its high endemicity. It isn’t surprising that the Cape Floral Region has coined the phrase ‘the world’s hottest hotspot of biological diversity’. Amazingly, 70% of Cape floral species are found here and nowhere else on the planet, surpassing many tropical forest regions in floral diversity and richness. The Cape Floral Region is located at the southwestern corner of Africa, and is an L-shaped area averaging only 100 km in width. It extends about 500 km along the south coast of South Africa from Cape Town to Port Elizabeth, and an additional 250 km northward from Cape Town to the semi-arid Namaqualand. This region experiences a very wet and cold winter followed by a dry summer period, which can lead to drought.

To date, 241 native orchid species belonging to the Cape flora are recognised (with many more likely to be discovered). This is an unusually high number of species for a temperate region, considering the relatively small size of the area.  These orchid species have not just merely eked out an existence in this region, but have thrived due to the unusual strategies they have evolved for survival in this harsh environment of ecological extremes. Of the 24 genera occurring in the Cape Floral Region, only 5 genera (8 species) are epiphytic with the majority being terrestrial (19 genera comprising of 233 species). The most well-known and rich genera is that of disa which has 104 recognised species. Of the disa genera the most famous species is that of Disa uniflora, an iconic red flower referred to as the Pride of Table Mountain. Its range is restricted to sandstone mountains, from the west of Hermanus to Table Mountain and northwards into the Cederberg. Disa uniflora thrives in seeps, waterfalls and streamlets in the

mountains and has one of the most complex orchid pollination systems, and is facilitated by the Mountain Pride Butterfly (Aeropetes tulbagia). Disa uniflora has also become a symbol used by the Mountain Club of South Africa and the Western Province Rugby Team in their emblems and badges. The Cape Floral Region has suffered great losses to orchid habitat, particularly on the lowlands of the region, due to overly frequent burning of habitats, urbanisation, poor agricultural practices and infesting alien vegetation. The result is that many orchid species are now lost forever or threatened with extinction. Alarmingly, some three-quarters (1700 species) of all plants on the South African Red List of threatened species occur in the Cape Floristic Region. Of the 1700 threatened plant species, 70 are orchid species. Click on the link below to download the list of orchid species found in the Western Cape (pdf format). Cape orchid species list 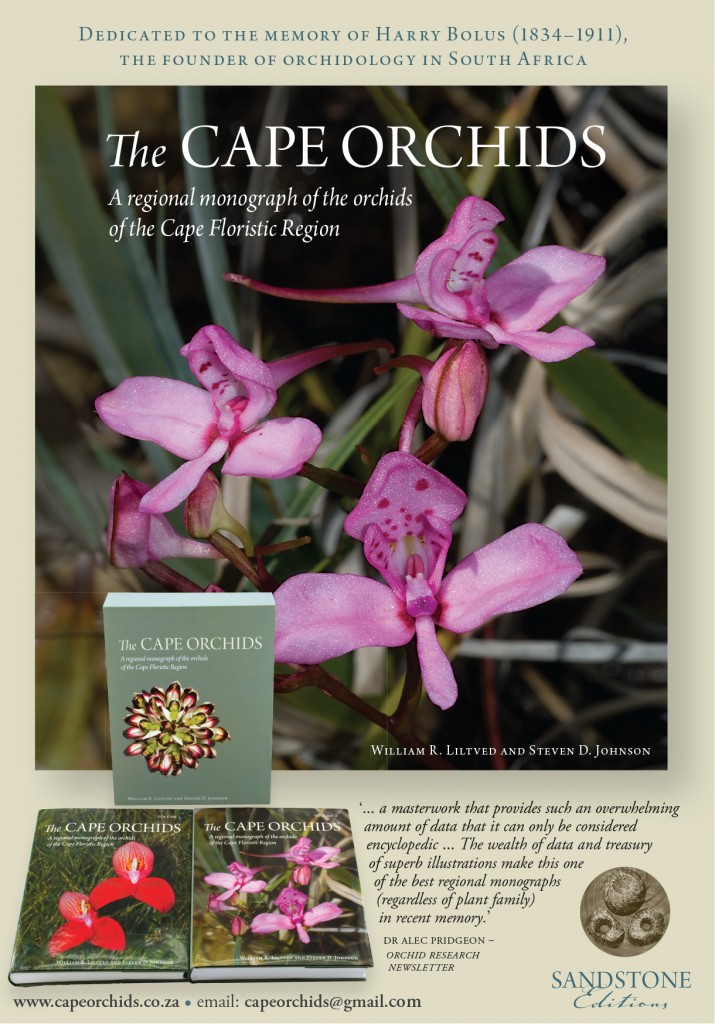 For those interested in learning more about the Cape Orchids, the COS has partnered with author Bill Liltved to offer ‘The Cape Orchids’ A regional monograph of the orchids of the Cape Floristic Region. The work encapsulates a comprehensive overview of what is currently known about the classification and ecology of all 241 orchid species, both terrestrial and epiphytic, of the 24 genera native to the Cape Floristic Region of South Africa. An area of prodigious biodiversity, this region has been declared a World Heritage Site and is recognised as one of the top International Biodiversity Hotspots. Orchids are one of the most treasured elements of the Cape flora and this book is intended as a fitting tribute to their magnificence. ‘The Cape Orchids’ is an indispensable reference work for botanists and plant-lovers alike.